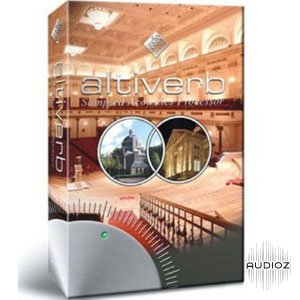 It takes about 1 minute to get max 16 seconds of reverb. Fast, shorter sweep for small rooms fast, but delivers only max 3 seconds of reverb. Sampling Reverb Gear Spring reverbs, echo chambers, plate reverbs and other analog reverbs: Digitally connected reverb gear: The spike is preferred when capturing presets with time variant features like chorus or wander.

The DA and AD conversion will cripple the spike when sampling an analogue unit and this will affect badly the timing in the IR. Better is to use a short sine sweep then.

Under more sweeps you can find a 1 second sweep that will do just fine. Spike files for reverb gear For sampling hardware reverb gear with digital input and output connections spdif, adat, aes-ebu, madi, dante. For analogue connected gear please use a short sine sweep. Spike 48k. All of them require you to drop the recording onto the IR import tab of Altiverb. The movie at the top shows how to switch to the IR import tab, and how to bring up the dropped audio description popup menu, of which we discuss the options one by one.

Without post processing Select this if the audio you are dropping is a finished impulse response downloaded from somewhere, or obtained using a digital spike recording through effect gear , or if you want to experiment using other audio.

Special effects can be achieved by using audio such as piano chords, breaking glass, spoken word, or drum rhythms. Select this item, drop the audio and listen to the result.

Whenever you like an impulse response do not forget to save it using the save to User IR folder button. Using audio like piano or voice normally results in material that sounds too dull. You need to really boost high frequencies. This is what the turning knob is for. It is a special type EQ called Enhance. What happens when you use a piano chord as an IR and then sing through Altiverb, is much like what happens when, in lighting, you want to use a blue and a red translucent filter to create a purple one.

It does become purple, but it also becomes rather dark. Pink means the high frequencies roll off at a certain very natural rate. Convolute them, which is a multiplication in the frequency domain, and you will see the roll-off slope is twice as steep. Very unnatural. To make up for that you can use the enhance knob which is a pink-to-white EQ and can bring back the high frequencies.

Sweep played back through a quality speaker Download sound files that contain a sweep tone from this page. These are meant to be played back in a room of which you want to capture the reverb in an impulse response.

Microphones should be used to record the playing back of the sweep tone in the room. The resulting recording can be dropped onto Altiverb. When this quality speaker option is selected The sweep tone will be calculated out of the recording and you will hear the resulting reverb right away. Altiverb will assume that you have used a quality speaker to play back the audio and will not attempt to make up for any frequency deficiencies of the speaker.

There are many advantages of using the audio ease method of creating impulse responses. The sweep is not equal loudness throughout, its level is higher where most speakers can take it and where the ear is more sensitive, resulting in less noise.

The Altiverb sweep method is immune to clock differences between playback and recording gear. Altiverb is unique in this respect. You can safely use one recorder to play back the sweep and another to record. You can playback and record at vastly or slightly differing samplerates, it is all no problem to Altiverb.

Third and fifth harmonic distortion, happening in a speaker that gets overloaded, sounds like a reflection of the sweep that started earlier than the sweep itself. In the result that will be cut off and will not affect the result. All reverb tails eventually dive into noise. At that point Altiverb needs to figure out how to fade out the tail. Sweep played back through a Tivoli PAL radio You play back a sweep much like described under quality speaker, but this time through a Tivoli PAL portable battery powered radio.

The Tivoli PAL radio is small, surprisingly wide-band, portable, available for over a decade now, and you can plug your iPod or other playback device right into its back.

For making quick Impulse responses intended for treating voices it can be ideal. However, the EQ curve of the Tivoli speaker goes up and down like nothing else, so to iron that out, choose this option. Slate claps If you need to match audio from a film set and the only thing you can find to make an impulse response from is the slate clap, you can cut it out drop it onto Altiverb and make an IR out of it.

Audio Ease has sampled the characteristics of the two most common slates clapper boards. The Denecke and the Ambient. Starter pistol A six millimeter caliber Flobert starter pistol can be used to make impulse responses. Use hearing protection when you use these and do not try to carry a starter pistol into a public space without telling everybody first. Because a starter pistol is loud the resulting signal to noise ratio is second only to the sweep method.

Amsterdam Concertgebouw The Netherlands The most prestigious classical music concert hall in the world is captured in stereo and quadraphonic impulse responses. It is extremely silent and served The purposes of both communist propaganda and recording of classic music, pop music, big band for the Broadcast of German Democratic Republic. Internationally regarded by performance artists for its superb acoustics, the Hall also houses a complete recording studio. With its high vaulted ceiling and interior finishes of brush box and white birch timber, it is designed primarily for acoustic performances. The original building stems from Severely damaged by Allied bombing and the Battle of Berlin the building was rebuilt from onwards and reopened as the concert hall of the Berliner Sinfonie-Orchester in

TODD-AO Room Template for Logic 8, Altiverb 6 & VSL VI Special Edition. So there are 4 instances of Altiverb, each with it’s own depth preset and in some. Buckle up (this is another long one), and join me for a first look one of the most popular reverb plug-ins on the market: Audio Ease’s Altiverb 7. Altiverb 7 is the industry standard convolution reverb plug-in for Mac OS X and Windows. It features top quality samples of real spaces to create reverb, ranging .